This year I decided that each month I’d like to visit a different city. After living in the Netherlands for 5 years, I haven’t really travelled or seen much outside of my ‘comfort zone’, ie Amsterdam. I tend to stick to what I know. I also think that all city centres really look like each other, so for me there is a lack of excitement, as it feels like de ja vu.

I decided that I would visit the Netherlands Ice Sculpture Festival in Zwolle. I wont lie, the weather on the day was awful, it was beyond grey, raining, so much non stop rain between heavy showers and mist rain, it was wet the entire day (ie typical dutch weather but with winter added in). I was hoping to make a slight road trip out of it but the rain deterred anything that wasn’t indoors or in the car. I didn’t even see the town it was in apart from literally going to the location and then back to the motorway. The theme was ‘what a wonderful world’, however, once I was inside looking at the sculptures at no point in time did I consider it had a theme or that the theme was ‘what a wonderful world’. I wont lie, oddly despite knowing that I was going to a ice sculpture exhibition, I did not think to bring gloves or a hat. I have no idea what I had in mind as to what I thought it would be but the thought of ‘cold’ never entered my mind. It was cold, so cold! As any normal person would expect… 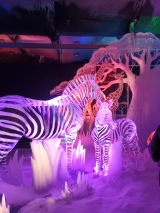 I did think there was an incredible amount of talent involved to crease such pieces of ice. Would I go again? No. There is something the Dutch quite simply dont do, queue. They are simply incapable of forming a line or keeping to a queue. So when you’re trying to follow the queue, people are going around you, before you… You cant simply take 3 seconds, snap your photo and move on, no before the person behind you thinks you’re taking too long and walks in front of you as you’re trying to take a picture. Its situations like this that I find quite infuriating.

During the Queens lying in state, I came across this and thought it was wonderful, so truly wonderful and so truly British. It gave me a great sense of British pride and made me think ‘f*ck me, this would truly NEVER happen in the Netherlands’.
I don’t particularly care either way about the Queen. But the queue? The Queue is a triumph of Britishness. It’s incredible.
Just to be clear: I don’t mean the purpose of the queue. I don’t mean the outpouring of emotion or collective gried or the event at the end and around the queue or the people in the queue. I mean, literally, the queue. The queue itself. It’s like something from Douglas Adams.
It is the motherlode of queues. It is art. It is poetry. It is the queue to end all queues. It opened earlier today and is already 4.2 miles long. They will close it if it gets to TEN (!) MILES. That’s a queue that would take TWO HOURS TO WALK at a brisk pace.
It is a queue that goes right through the entirety of London. It has toilets and water points and websites just for The Queue.
You cannot leave The Queue. You cannot get into The Queue further down. You cannot hold places in The Queue. There are wristbands for The Queue.
Once you join The Queue you can expect to be there for days. But you cannot have a sleeping bag. There is no sleeping in The Queue, for The Queue moves constantly and steadily, day and night. You will be shuffling along at 0.1 miles per hour for days.
The BBC has live coverage of The Queue on BBC One, and a Red Button service showing the front bit of The Queue.
NO ONE IN THEIR RIGHT MIND WOULD JOIN THE QUEUE AND YET STILL THEY COME. “Oh, it’ll only be until 6am on Thursday, we can take soup”.
And the end of the queue is a box. You will walk past the box, slowly, but for no more than a minute. Then you will exit into the London drizzle and make your way home.
Tell me this isn’t the greatest bit of British performance art that has ever happened? I’m giddy with joy. It’s fantastic. We are a deeply, deeply mad people with an absolutely unshakeable need to join a queue. It’s utterly glorious.

I try to visit Eindhoven once a year to visit the Van Abbe, its their modern art museum. I wanted to visit in December and it just didn’t happen. I thought Id take the chance to see a bit more of the city, as I tend to go from train station to museum and back again.

It started with going to the Van Abbe, I must admit that I didn’t enjoy the current exhibitions as much as I have in previous years but I did have a few laughs. If you cant laugh and giggle at art, then all is lost. I then decided to visit the DAF museum. Before looking up, ‘things to do in Eindhoven’, I had never heard of DAF left alone that they had a museum. DAF is a leading global truck manufacturer with a firm focus on innovation, quality and transport efficiency. Previously they made small cars but the focus is now on trucks. The museum was interesting because it featured other brands of cars to, Im still unsure as to what the link was but interesting to see. Im really a girl when it comes to cars, gas is on the right, brake is on the left, what more do I need to know? Ok, Im not quite that bad but close. 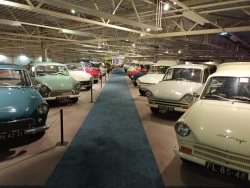 It was nice to explore Eindhoven slightly more than I usually do. Getting lost between finding museums and seeing parts of Eindhoven I hadnt previously. The centre is must like any other large Dutch city centre.
I have previously visited the Philips museum and I wasn’t a fan. It felt to me that they missed many opportunities to showcase their achievements in technology beyond what the public know them for. It was also quite interactive for children, as I dont have children, I didn’t find it engaging for adults (or me). I had considered visiting it again but much like the DAF museum, once is enough for me 😉.
Of course I then went to Five Guys, oh how I long for Amsterdam to get Five Guys! There are a few Taco Bells around the Netherlands, Eindhoven is one of the locations, I skipped out on it (as I was rather full from FG) but regretted it on the train home… Some foods and fast food restaurants I miss and take far too much glee in finding in the Netherlands.
January – box ticked for visiting a new place, if not two!
January 21, 2023January 21, 2023 ~ Emme ~ Leave a comment

5 Years in the Netherlands

2022 was my 5 year anniversary living in the Netherlands. What a 5 years it’s been, from extreme highs to extreme lows and quite frankly everything in-between. I’ve been lucky to meet some truly extraordinary people who I am honoured to now call my (best) friends (and other select words), who have created a family for me in the Netherlands. Im incredibly grateful to have met people who are as sassy, understanding, crazy and cat loving as I am.

Here are some just a few highlights from my 5 years in the Netherlands: cocktails (so many cocktails), selfie museums, staycations, surviving the pandemic (just), games nights (and virtual quizzes), bets (mostly me losing them!), concerts, musicals and museums, buying a house (and everyone helping me to to paint it!), skydiving, Wadlopen and of course, cats, my precious pampered cats.

Its been a truly astonishing 5 years… Whilst I will never see Brexit as a positive thing, I am grateful that it brought me to the Netherlands and forced me to start everything from scratch. This is the 4th country Ive lived in (also my second time in the NLs), learning Dutch has been a unique experience (I have no doubt I’ll always murder the language even though Im at level B1) and merging 3 cultures (American, British and Dutch) has not always been an easy task. I am grateful that I now call the Netherlands home and look forward to seeing what the future holds.

Every year I try to visit a place called Zaanse Schans, which is a quintessential tourist location of window mills, lots of wind mills. I take a picture and then get to compare myself over the years. Its a massive tourist attraction but there are times when you can plan it when its quiet and theres something really calming and quaint abut it.

2022 seems to be the year everyone forgot Corona existed, to see how far we’ve come and yet how quickly we’ve gone back to our old ways.

What a year it’s been. Some of my highlights from the year: 3am emergency vet visit in the Hague, Friendsmas, days out, swimming with dolphins, turkey hats and laughs, there have been so many laughs! I like to think that laughter keeps me sane.

Coming from a family of scuba divers, this year I decided to officially dip my toe into scuba diving. Anyone who knows me, knows that I am not a fan of the ocean, I find it dirty (not in a tree hugger, think of all the plastic you use kind of way). Thanks to my germ-a-phobia I have, I think this will always be an issue. However, what I realised with scuba diving is that I get sick sea and then land sick (awesome!) for days afterwards.

After a the very unfortunate and tragic death of George last year, Callie changed. Her entire personality changed, she’d follow me around the house and would run to the door every time I would come and go. Given that Callie was never like this wither other cats, I thought she was lonely and wanted a friend. Lady Penelope (Penny) joined the house, she has brought energy, entertainment and sass, shes a very sassy Maine Coon kitten. I thought Callie wanted a friend, 7 months later and Callie is yet to be fully convinced of another cat in the house and most certainly have buyers remorse on my behalf. They do play together, occasionally until Callie realises shes also too old for a kitten. Its Callies biggest secret that she likes Penny but it’s a closely held secret. I now have 2 cats with seem to be the combination of who I am, one whose rather autistic and hates change and the other whose ready to do something, between naps.

Its been a year, a year of challenges, progress and laughs.

Hiya, thank you for visiting. Im Emme and its nice to meet you! I am a expat who lives in Amsterdam, the Netherlands with a accent that sounds confused. I have a passion for cats and baking, preferably not putting the two together. My life is an adventure on a blow up raft, sometimes the water is calm and sometimes I lose a paddle or the air comes out of the raft. Come and join my raft and enjoy the ride. I hope to see you here again soon!